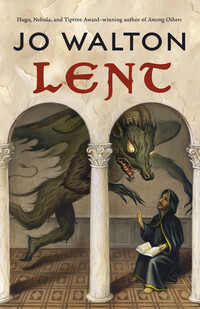 From Hugo, Nebula, and World Fantasy Award-winning Jo Walton comesLent, a magical re-imagining of the man who remade fifteenth-century Florence—in all its astonishing strangenessYoung Girolamo’s life is a series of miracles.It’s a miracle that he can see demons, plain as day, and that he can cast them out with the force of his will. It’s a miracle that he’s friends with Pico della Mirandola, the Count of Concordia. It’s a miracle that when Girolamo visits the deathbed of Lorenzo “the Magnificent,” the dying Medici is wreathed in celestial light, a surprise to everyone, Lorenzo included. It’s a miracle that when Charles VIII of France invades northern Italy, Girolamo meets him in the field, and convinces him to not only spare Florence but also protect it. It’s a miracle than whenever Girolamo preaches, crowds swoon. It’s a miracle that, despite the Pope’s determination to bring young Girolamo to heel, he’s still on the loose…and, now, running Florence in all but name.That’s only the beginning. Because Girolamo Savanarola is not who—or what—he thinks he is. He will discover the truth about himself at the most startling possible time. And this will be only the beginning of his many lives."Rendered with Walton's usual power and beauty...It's this haunting character complexity that ultimately holds the reader captive to the tale." —N. K. Jemisin,New York Times, onMy Real Children